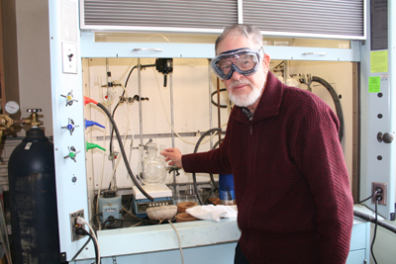 Professor Matteson has been at WSU since 1958. After completing his undergraduate work at the University of California, Berkeley, and his graduate work at the University of Illinois, Urbana, he spent one year as a research chemist at the du Pont Central Research Department. He has been recognized with an Alfred P. Sloan Foundation Research Fellowship. He has served on the editorial advisory board of the American Chemical Society Journal, Organometallics, and of the new journal Heteroatom Chemistry.

The two great challenges of synthetic organic chemistry at the present time are the control of stereochemistry and the efficient construction of carbon-carbon bonds. We have discovered a method for the efficient connection of carbon atoms with very high asymmetric selectivity which uses a chiral boronic ester group as the template. We have recently obtained diastereoisomer ratios as high as 1000:1. This chemistry is useful for making a wide variety of biologically interesting molecules, including insect pheromones, sugars, amino acids labeled with stable isotopes, antibiotics, and boronic acids that are enzyme inhibitors.
A simple example of how this chemistry works, the synthesis of an alcohol which is a component of the pheromone of the elm bark beetle is illustrated by the structure diagrams.