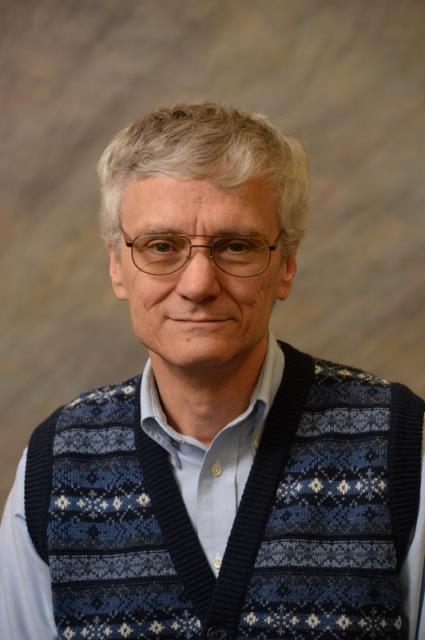 Professor Wherland received his Ph.D. from the California Institute of Technology, where he worked with Harry Gray on the kinetics of metalloprotein electron transfer reactions. He then did postdoctoral work on protein-protein electron transfer reactions at the Weizmann Institute of Science. He came to WSU in 1979, after working at the Kettering Research Laboratory on reactions catalyzed by the purified components of the nitrogenase enzyme system.The common theme of research in our laboratory is the study of the kinetics of reactions of transition metal complexes, particularly electron transfer reactions. Electron transfer reactions are involved in most energy transfer processes from metalloproteins and metalloenzymes to batteries and many catalytic processes in organometallic chemistry. As such, a detailed understanding of the factors which control the rates of electron transfer reactions is central to understanding how these processes occur and how to design better electron transfer reagents. We are now extending our interests to reactions involving reactions of coordinated ligands.Projects in our laboratory typically involve three stages. First comes the synthesis and characterization of the reactants. This may be as simple as repeating a common synthesis, or it may be as complex as design of a new molecule to test a specific prediction of a mechanism or electron transfer theory. In this stage techniques used include organic synthesis of ligands, inert atmosphere methods for synthesis of transition metal complexes, infra-red, NMR, electronic spectroscopy, and electrochemistry for the characterization of the complexes. The second stage is the study of the kinetics of the reaction. We typically use two methods, stopped-flow spectroscopy and NMR line broadening. The stopped-flow technique is used to study reactions which occur in 0.001 to 10 seconds and which involve a color change. The NMR methods are used for reactions, such as electron self-exchange reactions, which have no net chemical change. We are also equipped to study the pressure dependence of the rate constants by stopped-flow, and thus we can determine the difference in volume on going from the reactants to the transition state. The kinetic measurements are most challenging for the mechanistic study of the reactions of coordinated ligands since complex rate laws and the formation of intermediates are involved. The last stage is the analysis of the data within the currently available theories, either electron transfer theory or a mechanism proposed to be compatible with the rate law and other observations.. Computing is involved in both the kinetic data analysis and the theory. Depending on the reaction studied and the interests of the student, any of the three stages can be emphasized from the more synthetic to the more theoretical.

Projects currently available include the following:

1. The stopped-flow method can be used to study reactions between different metal ion complexes in order to test predictions of the effect of charge, size, ligand conjugation, solvent, and added electrolyte on the reactions rates. A type of reaction in this class is given below where “Co(cage)” represents a Co complex which totally encapsulates the metal ion, making it inert to substitution by other ligands. The following reaction involves a triply bonded dirhenium complex. The reaction is inhibited by ca. 750 fold if the Co(cage)+ is ion paired with BF4-.

2. The following reaction scheme demonstrates the different types of reactivity that the complex, especially the coordinated ligands, can undergo. The type of reactivity depends on the entering nucleophile. Phosphines with a pKa of greater than 5 follow the upper path, more basic phosphines follow the upper path. Triphenylphosphite replaces the acetonitrile. We are studying reactions such as this one to determine the mechanism and what controls the product. This work involves a collaboration with a research group in Vienna.

3. Current work on biological electron transfer reactions involves the study of the thermodynamics of the formation of the disulfide radical. This work is related to pulse radiolysis studies performed in collaboration with scientists at the Weizmann Institute.